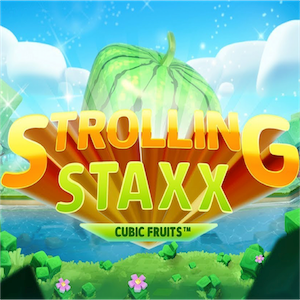 NetEnt is on a full-speed roll for 2019. The developer has just launched a brand-new addition to its existing portfolio. The new Strolling Staxx Cubic Fruits promises to be a hot commodity in the world of slots, and officially went live at all participating operators on January 24.

The new release is part of a trilogy of games in a single series, and is third in line after the release of Butterfly Staxx and Neon Staxx. The previous two releases were both big hits among players all over the globe, and judging by the response of those who have already tried their luck with Strolling Staxx, the latest release is bound to be the most popular one of all three.

True to NetEnt’s way with its slots, the new addition to the fold is jam-packed with special features and mega opportunities to win some serious cash. Colossal Symbols and Bonus Bets, two of the features that had been incorporated into some of the developer’s previous slots too, are once again part of the platinum package.

Despite being third in line in the series, Strolling Staxx is very different from the previous two releases. It consists of a quite unusual combination of 5 reels, 3 rows and only 10 fixed paylines. This having been said, this is a recipe that really works, however unconventional.

The slot reminds strongly of the old classic Nintendo games, and players who used to enjoy those are bound to be fans of Strolling Staxx. The classic feel is very much a walk down memory lane, and the workings are very similar to the arcade-style games of yester-year.

But nostalgia aside, there are also many ways to win big money! High paying symbols like the Watermelons, Cherries, Strawberries and Lemons pay out the big money, and betting high is advisable as there is a 5000x bet multiplier up for grabs!

The unusually high jackpot sets this online and mobile slot apart from its contemporaries, and if anything, NetEnt has managed to get us to sit up and pay attention. Bring on 2019!