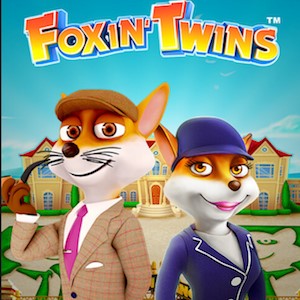 The digital branch of Scientific Games, known as SG Digital, has just released its newest video slot. Foxin' Twins follows its successful predecessors in the series including Foxin' Wins and Foxin' Wins Again. All titles were developed by the company's NextGen Gaming division. The graphics and functionality are as impressive NextGen's other releases.

As the name would suggest, Foxin' Twins features 2 almost-identical sets of slot’s reels. The so-called Dual Reels Mechanic means there are blue and green sets of 5 reels, complete with blue and green Wild Symbols respectively.

The charming characters and cartoon-like graphics from the other Foxin' titles are seen here, as the reels spin at the same time. They are set above a pair of well-to-do houses, Foxin' Manor, where Mr and Mrs Foxin' and their twin cubs live.

Possible bets range from 0.25 to 625.25 coins per spin, and the theoretical Return to Player Percentage is 95.25% to 96.75%. Scatter Symbols, Free Spins and multipliers make the slot more exciting and rewarding. Other icons on the reels include champagne, a mansion gate and other symbols of wealth, along with lower-value playing cards.

SuperBet is the most engaging special feature in Foxin' Twins, and is the reason for the variation in the payout rate. Players can bet and win in the base game, or can activate the SuperBet 1 or SuperBet 2 options. The levels cost 2x and 4x as much as the base game wagers and increase the frequency of the Reveal Wild and Multiply Wild special features.

The Reveal Wild, seen on the left set of reels, is randomly activated. A cute little fox pup appears and jumps onto the reels to turn up to 3 symbols into Wilds. With SuperBet off the pup appears over Reel 3 only; at Level 1 it can be seen on Reels 2 to 4 and at Level 2 on Reels 1 to 5. The green Multiply Wild, seen on the right reels, applies a multiplier whenever it forms part of a winning combination. The possible multipliers increase with every SuperBet level.

The parent company seems very satisfied with this latest release. As Chief Creative Officer Tom Wood said, Foxin' Twins is a great new instalment in what is one of the brand's most popular game series. The special features deliver “invigorating new experiences” while still honouring what he referred to as a “legacy brand”. Wood finished by saying he was sure SG Digital's partners and players would both enjoy the new variation on the Foxin' theme.