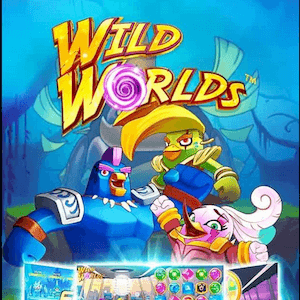 Swedish online and mobile casino software developer NetEnt has had a few exciting developments to announce over the past few weeks. One of the most recent has been their revelation that they have officially released their new Wild Worlds online slot, which packs in plenty of winning potential thanks to its various innovative bonus rounds.

The new title is a 5 reel, 5-row creation with a unique comic book theme about it. It portrays a variety of different worlds that can be unlocked in the free spins and bonus rounds, in which valiant heroes battle villains for the chance to scoop incredible cash prizes on your behalf.

The worlds on offer include the Dark Forest with spreading wilds, the Fire World with random wilds, and the Ice World with heavy wilds in tow to provide top winning chances. Wild Worlds and all of its miniature universes can be enjoyed across multiple devices too, thanks to the slot’s flawless compatibility with both desktop and mobile platforms.

Aside from its quirky bird superhero characters, this title has plenty to offer in terms of visuals. Its backdrops are immersive and highly detailed, its symbols are attractive and colourful, and the reels are packed with an assortment of multi-coloured gems and character symbols, along with fusion gemstones that supply the biggest prizes.

NetEnt Comments on the Release

Commenting on the launch of the new title, Bryan Upton of NetEnt noted that his team is very proud to welcome Wild Worlds to its growing portfolio of video slots. Upton described it as a “game like no other”, and says that players will definitely agree as they battle a unique horde of anti-heroes in pursuit of heroic cash wins.

Again, Upton said, NetEnt has listened to its players’ and customers’ input when creating its latest title. He says that players wanted games that included elements of discovery therein, while also being unique and entertaining at the same time, and his team was pleased to be able to deliver just that.

The spokesman says that his team has taken Wild Worlds in a bold and creative new direction, which has resulted in an amazing visual journey that is sure to captivate online casino enthusiasts. What’s exciting, he said in a press release about the slot, is the unparalleled levels of content and storytelling in the title, which will enhance engagement and ensure a standout experience. Lastly, he hinted that players should try defeating the game’s main boss and see what happens.