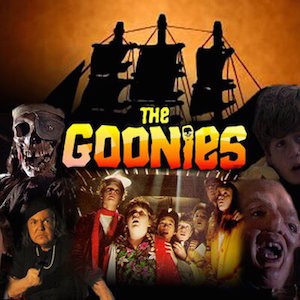 The 80’s gave us just about the best of everything; food, cars, music, and of course, movies. One of the cult classics of the 80’s was released in 1985. We’re talking, of course, about the American adventure classic, The Goonies. The good news is that The Goonies has just been developed into a slot game by none other than the super-creatives at Blueprint Gaming.

Players can now call on the help of all of the beloved characters from the movie to find the many hidden treasures of One-Eyed Willy. As far as feature-filled branded slots go, this one is bound to get the hearts of many players beating in double-time.

No End To The Bonus Features

As jam-packed as what The Goonies were popular, the slot features 6 bonus games and an additional 6 side-games. Never a moment’s worth of boredom on the 5 reels and 20 paylines. A treasure map forms the backdrop against which the reels are mounted, and to add a bit of humour into the mix, the movie’s characters appear in a very comic fashion on the screen.

As for the side games, these are chock-full of rounds with guaranteed cash prizes (aren’t those just the best?), free spins, additional wild symbols and random multipliers. There’s nothing quite like a relatively small bet turning into a major windfall thanks to a multiplier! The bonus games too, do not disappoint. No signs of boredom here either, as stacked symbols, entire reels gone wild, and high-paying winning combinations enter the star-studded scene.

As for Blueprint Gaming, this was obviously a calculated move, and judging by the quality of the end-result, an idea that someone over there must have been very passionate about. It’s obvious that heart and soul was poured into this particular game.

Jo Purvis, Director of Marketing and Relationships at Blueprint Gaming, offered a warm invitation to all fans of the 80’s and the classic show to join in The Goonies fun. Purvis described The Goonies as a pure classic and said that the iconic 80’s film would be the making of some incredible adventures in its new licensed slot format.